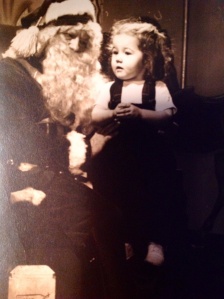 I know a secret about Santa Claus. He came to my house, and I wasn’t even asleep and it wasn’t even Christmas yet. And I found out something nobody else on Earth knew. And they didn’t believe me!

I was about six years old. I was watching Uncle Miltie on TV (bonus points if you know who that is!) when the doorbell rang and mommy went to answer it. I paid no attention, engrossed in the slapstick antics on TV. Mom came back through the vestibule, all excited. “Babe! Look who it is!” And in walked Santa Claus. Right into our living room. I mean, seeing him in Gimbels Toyland was one thing, but wow. This was huge. Wow.

He was quiet and soft spoken and had a sack with him. He was shown to grandmom’s great big chair that we weren’t allowed to sit in……but of course, he was Santa.

“You are Marianne. Come and sit with me,” he said softly, holding out his arms. I was the shyest little girl in the world, but what could I do? I went. He helped me up on his lap so we could chat.

I was face to face with the real Santa Claus. Not the kind in the big store. The one who comes to your house. I mean THISCLOSE. He asked the usual questions, I gave the usual answers. And the whole time, I stared at his face, mesmerized. I had noticed something. Something earth shattering. I remember thinking, “Wait til I tell them!”

Well, we finished our conversation, I got a candy cane, and he told me to get right to bed. To be honest, that kind of annoyed me. We were always allowed to watch Uncle Miltie! But well, you can’t argue with Santa, right?

He left and mom, dad and gram were so excited! The real Santa Claus, not one of those helper guys, came to our house! I was calmer. I had insider info on him now and I wanted them all to know.

“Santa Claus is colored,” I announced importantly. They were very surprised, to say the least.

“Yes,” I agreed. “I did. He was wearing a mask.” I had studied that mask up close and behind it, I saw a colored man. Can’t fool me.

“Well,” said mom, “he wears the mask to keep his face warm on the way down from the North Pole in the sleigh.”

I remember so clearly thinking “Well, okay, you can still think that if you want to. But I know he’s colored.” And that was fine with me. You can fool the whole rest of the world, but not me. Nope. Santa Claus is colored!

I kept this intelligence to myself from then on. It was my biggest, most spectacular secret.

I never forgot that night or that Santa. Even when nobody believed me. In his honor, I have a ‘colored’ Santa among my Christmas decorations to this day, a memory of a truly magical night and a truly magical visitor. 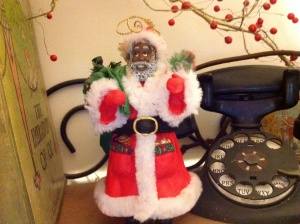