Today’s featured letter is B! How appropriate that Baseball season opens this month and Baseball is a sport I can actually follow and almost completely understand! So my blog post for B will focus on The Great American Pastime and how I came to know it.

Baseball formed the background noise of so many lazy summer days when I was a kid. Windows open, fans droning, hot city streets outside, everybody just sitting around……and the little Bakelite Westinghouse radio on the shelf crackling with the nasal voices of Byrum Saam and Bill Campbell calling the play by play. Richie Ashburn, Del Ennis, Robin Roberts…….Yeh, I know them.

What was really special was if dad and some of his buddies got together for a game in the street. Oboy, dad’s playing baseball! He made a hit! Hey, dad! 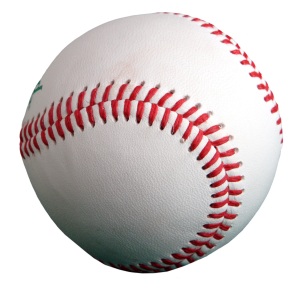 My longest association with baseball came many years later when my son was in Little League. He played for ten years, all the way to American Legion ball, and was a really good natural athlete. His nickname was The Vacuum Cleaner……nothing got past him at first or third base.

There were times when my enthusiasm outran my knowledge of the game. Like when I heard the “clunk” of the bat on the ball and leaped up, yelling, “Run, Michael! Runnnnn! Runrunrun…..!”, only to be admonished by my dad. “It’s a foul ball.” Well, okay, then. Fortunately for Mike, he knew not to run.

We still spend hot, lazy summer days listening to baseball. Only now we use a 21st century electronic device to tune in. And I still don’t grasp some of the fine points, like The Infield Fly Rule and the Pace of Play rules. But you don’t need to know that stuff to lean back and listen to the play by play, let it wash over your memory, and take you out–take you back–to the old ballgame.

Follow Musings with Marianne on WordPress.com
Join 95 other subscribers