I can describe getting around London in two words: Im. Possible.

Got in on the Eurostar on Sunday night. It was after 11pm….traffic wasn’t bad. We got into our flat near Harrods and hit the beds. Phew! 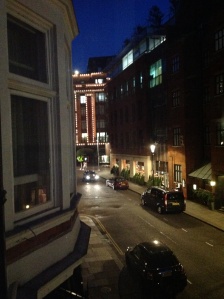 The view from the front window of our flat. That’s Harrods in the middle. 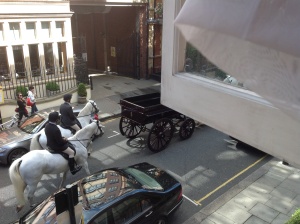 Each morning, the Queen’s horses came clip clopping down the street, getting their pre-event exercise. The Royal Mews was nearby.

First of all, crossing streets. Impossible. It’s bad enough that traffic is coming from the opposite direction, no matter which way you look. But crosswalks, a supposedly safe place to cross, are not at corners, but staggered in various places along the street.

And the traffic!? Impossible. I have never seen such traffic! Cars, taxis, buses, cycles, just swarms of them, they never stop coming. I must say though that the air was cleaner since last time I was there. They have cleaned up those diesels. But the volume, the sheer numbers of motor vehicles……..

Yes, that is a gold Ferrari. No, it is not my rental.

That makes surface travel ….. impossible. We did one of those hop on-hop off bus trips, thinking to save time finding the places we wanted to see: Westminster Abbey, The Tower, St. Paul’s, etc. It took HOURS and we got a nice sunburn sitting on top of the bus. Sunburnt in London…..not impossible this trip.

Actually, it was kind of hot. London hot, not Philadelphia hot, but still. And adding to the heat were the masses of people crowding the city. Gangs of them.

To begin with, Britain was celebrating the DDay landings. People from all over the Isles jammed the city, joined by people from Commonwealth countries and former possessions. Many Middle Easterners and Africans. Asians. Europeans. You could hear a different language every few feet you walked. And you walked ssssslllloooowly.

The Queen was back home, the Royal Standard was flying over Buckingham Palace, and the guard needed changing. Let’s all get over there!

It was Prince Philip’s 93rd birthday. We need a 42 gun salute and let’s close a few streets to traffic near the salute venue, just in case it’s not confusing enough to get around.

Somewhere in there, Prince Philip is taking his birthday salute in Hyde Park.

But mostly, Saturday, June 14 marks the Queen’s official birthday celebration, a huge event. Another reason for crowds! And more events! And street closings!

At Westminster Abbey, there was noticeable police presence and admission to the Abbey would be ‘delayed’. Well, that was worth the wait because this event included Prince Charles as the senior royal in attendance. I waved; I don’t think he noticed, though. 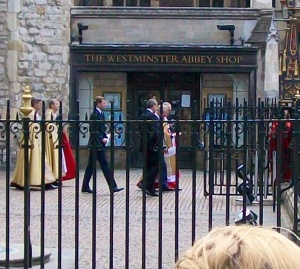 Prince Charles is flanked by Abbey potentates. See him there in the middle?

So even though I did manage to see and do most of what I planned, I gave up on a lot of other things simply because getting around was: IMPOSSIBLE!

Now back in France, in Paris. They aren’t celebrating WW II until August, on the anniversary of the Liberation of Paris. Their Bastille Day is not for another month. And it’s nobody’s birthday. Hoo-rah. Much less traffic. Easier to cross the street. Ok, too crowded at the Eiffel Tower, but I’ve been up there several times so……

Now relaxing. A lot to be said for this relaxing thing. Talk to ya later!

2 thoughts on “London: It’s Not For Sissies”